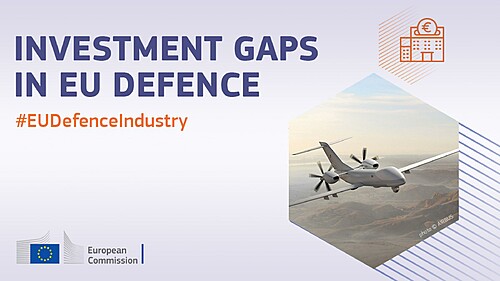 The European Commission and the High Representative on 18th of May 2022 issued the Joint Communication on the Defence Investment Gaps Analysis proposing further measures to strengthen the European defence industrial and technological base.

This delivers on the request of EU Heads of State or Government who, at the Versailles Summit on 11 March, invited the Commission, in coordination with the European Defence Agency to: “put forward an analysis of the defence investment gaps by mid-May and propose any further initiative necessary to strengthen the European defence industrial and technological base.”

Member States recently announced increases in their defence budgets close to €200 billion in coming years, after substantial cuts and severe underinvestment over the last two decades. The Communication calls on the EU Member States to avoid uncoordinated spending which results in further fragmentation on the demand and supply side.

The Commission and EDA assessed the capability gap based on the new security situation. Following this analysis, it is suggested to focus on three issues as urgent short-term priorities: replenishing stockpiles, replacing Soviet-era legacy systems, and reinforcing air and missile defence systems.